What You Need to Know

The Egyptian Theatre is requesting $2.5 million from the City of DeKalb to install air-conditioning which the Theatre has never had since it opened in 1929.  Funding is being requested from available TIF funds.  We need the community to make their voices heard to our elected officials in order to get this funding approved.  It is time for the Egyptian Theatre to be open year-round.  #ItsTimeFor12Months

Air-conditioning is necessary for a number of reasons:
1) Economic Impact – currently the Egyptian Theatre has over $2 million in direct economic impact to the community.  This will increase with year-round operation.

2) Sustainability – it is difficult for any business or organization to survive, let alone thrive, when it can’t generate revenue year-round.

3) Cultural Impact – with over 40,000 patrons a year attending events at the Egyptian, it is a prominent arts and entertainment center for the region.

4) Preservation – the heat, humidity, and large temperature shifts in the historic Egyptian Theatre have a significant impact on the ongoing preservation efforts of the Theatre.  Deterioration of the ornamental plasterwork and decorative painting is accelerated with no climate control in the Theatre. 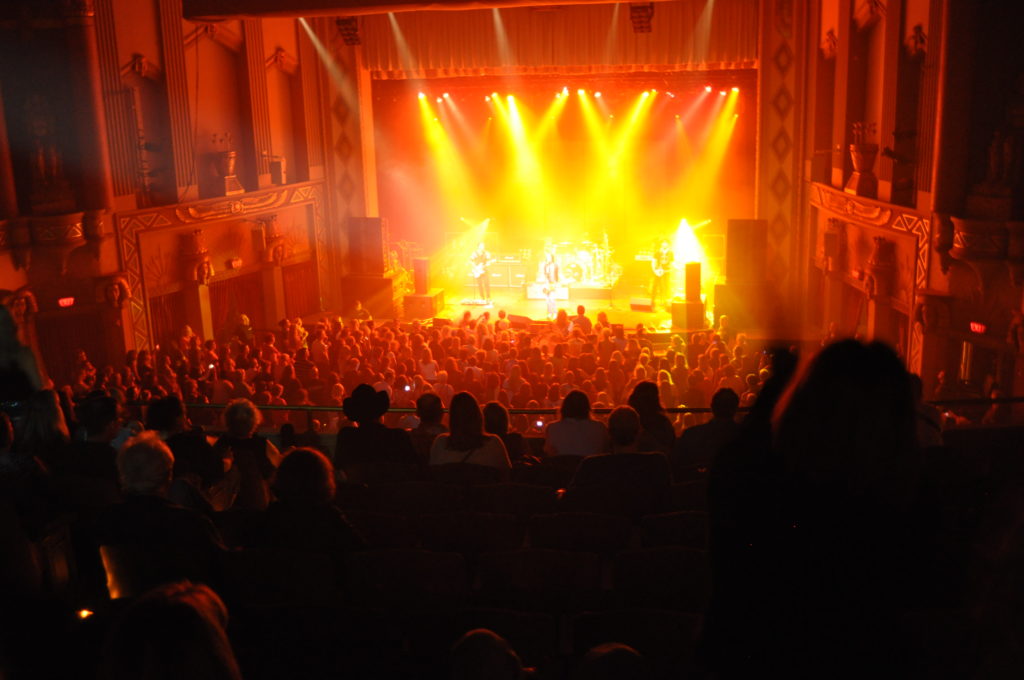 What you need to know…

-The Egyptian Theatre has never had air-conditioning since 1929.  Because of this, the Theatre is closed during the summer months.  Concerts, community events, weddings, and other events decide not to use the Theatre in the summer after learning there is no air-conditioning.  This makes it extremely challenging to go 3 months with no revenue but have continued operating expenses.  As an organization, we currently must generate enough revenue in 9 months to get us through the 3 dark months with no events.

-The Egyptian Theatre being closed for 3 months during the summer and less busy during the neighboring months due to unpredictable weather makes a significant impact on the downtown businesses and area hotels.  Not only are most of the NIU students gone during the summer months, but a major downtown traffic generator (the Theatre) is closed.  Downtown restaurants and businesses note that the summer is extremely tough and they desperately need the Egyptian Theatre open.

-The lack of air-conditioning makes maintenance and upkeep costs higher than normal.  The heat and humidity are extremely tough on the ornamental plasterwork and decorative painting.  They also impact the stage curtains, seat fabric, and sensitive electronics in the building.  The community has invested a great deal into the Egyptian Theatre since it was saved from the wrecking ball in 1978.  Air-conditioning will help protect that investment.  A Wurlitzer Theatre Organ valued at $600,000 was donated to the Theatre back in 2008 but has yet to be installed because the lack of air-conditioning would be detrimental to the organ.  That project has remained on hold until there is a set timeline for installation of air-conditioning.  The Egyptian Theatre originally opened with a Wurlitzer Theatre Organ, but the console was sold off in the 1940’s and the remaining parts were sold off in the 1980’s due to a lack of funding to restore the organ at that time.

-Why is the air-conditioning project so expensive?
The historic Egyptian Theatre, which opened in 1929, has never had air-conditioning nor was it designed for such a system.  In addition to the equipment needed to adequately air-condition the nearly 30,000 square foot building, there are infrastructure upgrades required.  The power and gas supply to the building will need to be upgraded.  New duct work will need to be carefully run throughout the building.  Some asbestos abatement in the basement and attic spaces will need to take place.

It is important to note that this project will not just address air-conditioning.  It will upgrade the existing heating and ventilation systems in the building to bring them up to current standards and increase efficiency.

The building was not designed to structurally handle the weight of mechanical units, so there will need to be plans made to accommodate these units.  Lastly, the fact that the Theatre is a performance venue requires the system to be carefully designed so that when the system is operating it is not disruptive to the performance experience in the Theatre.

-Does the City of DeKalb have funding for this?  Will taxes go up?
This funding request is for the central business district TIF district.  Current estimates are that there is around $9 million available in funding for projects in this TIF district.  This funding request, if approved, will not result in any tax increase or new fee.  This request is for funds that are already available.

Multiple system designs were considered and evaluated.  With the limited space available around the theatre, it was decided that rooftop package units were the best solution.  These units are too heavy to sit on any existing part of the Theatre.  They would need to go on land adjacent to the Theatre that would need to be acquired.  The design incorporates the latest energy efficiency technology.

-What impact is expected?
Below are the numbers for our most recent season listing the number of events, patrons, and direct economic impact.  We’ve conservatively put together what the numbers might look like with year-round programming once we have air-conditioning.  We expect there to be continued growth once the Egyptian Theatre is open year-round.

-Mission Statement: To share and protect the historical integrity of the theatre as a regional arts center for entertainment and community involvement.

-Vision Statement: The historic Egyptian Theatre is recognized as a center for the arts and entertainment in the region, enriching the community culturally and economically.  The Theatre is a beloved gathering place and source of pride, providing programming and excitement now and for future generations.

-The Egyptian Theatre is currently operated by 4 full-time employees and 2 part-time employees.  This is significantly lower than other theatres in the region and comparable venues around the country.  It is challenging to grow staffing levels without being open year-round.

*Where do we get this number?  The www.americansforthearts.org has done extensive studies nationwide that are used by arts organizations and elected representatives.  Their most recent study from 2017 shows that local attendees spend on average $22.44 and nonlocal attendees spend on average $43.79.  We know from our ticket sales that on average 70% of our audiences are from outside the DeKalb/Sycamore area.  When we multiple that against our annual attendance, include our annual expenses that are primarily spent locally, and include the capital projects we complete on an annual basis with local contractors; our annual economic impact is over $2 million dollars currently.  For more information on the Egyptian Theatre annual budget and funding sources: click here.

-The Egyptian Theatre is one of seven left in the United States and the only one East of the Rocky Mountains.  The Theatre is listed on the National Registry of Historic Places and was named 1 of 150 Great Places in Illinois by the American Institute of Architects.  In 2018 the Egyptian Theatre was named 1 of 20 architectural treasures in the State of Illinois for the state bicentennial.  The Theatre is the largest auditorium in DeKalb County and home to the largest movie screen in DeKalb County. 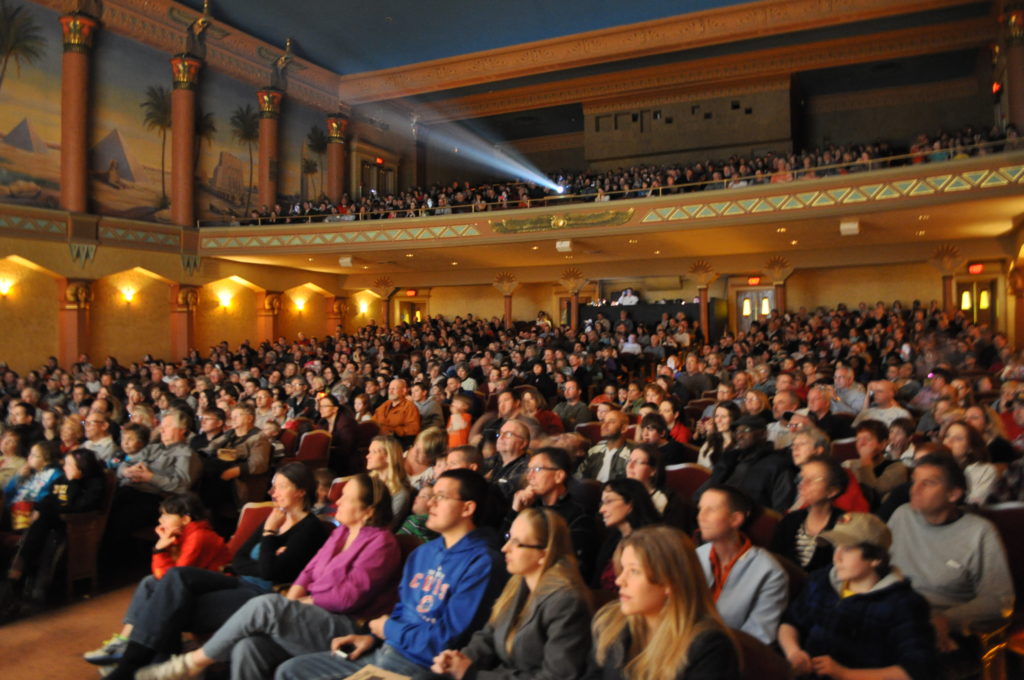