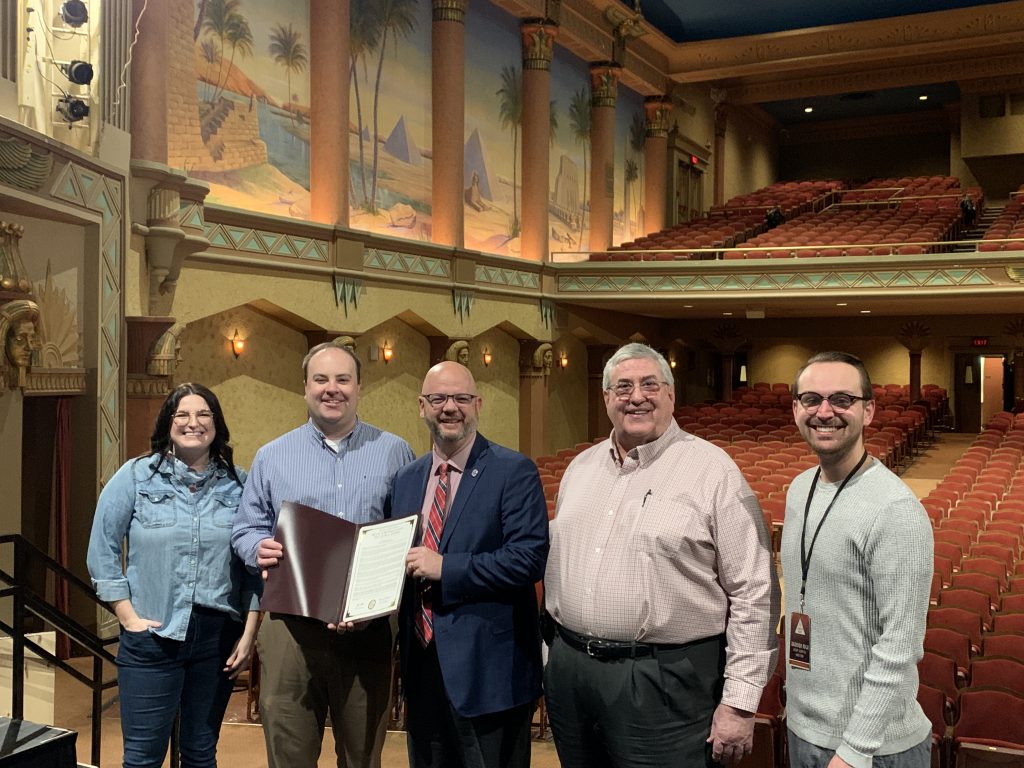 The Egyptian Theatre in Downtown DeKalb was recently recognized by the State of Illinois House of Representatives with a House Resolution honoring its 90-year history.

This acknowledgement is even more meaningful because as a resolution, rather than a proclamation, it was voted on by the 101st General Assembly and has been added to the archives. The Theatre is thankful to Representative Jeff Keicher (R-Sycamore) for bringing this resolution to the House floor.

“The Egyptian Theatre has been a beacon for the arts and cultural life in DeKalb for over 90 years, and I am proud to join the community in celebrating their milestone anniversary,” said Rep. Keicher. “The Egyptian Theatre has earned distinction as an architectural treasure and a historic landmark, but their enduring legacy remains embodied within the multitude of talented artists, entertainers and musicians who have graced its stage past and present. Especially today, during this challenging time when public access to arts and culture remains on hold, we must cherish local gems like the Egyptian Theatre and look forward to the day when we can re-enter its doors and celebrate together.”

The Egyptian Theatre, which opened its doors on December 10, 1929, has been celebrating its 90th anniversary during its 2019-2020 season with a classic movie series, welcoming touring artists who have a performance history at the theatre as well as conducting at $5.5 million expansion project. While the 2019-2020 season has been cut short, the Theatre remains optimistic.

“The Egyptian Theatre first opened its doors at the start of the Great Depression, made it through World War II, September 11, and more,” Egyptian Theatre Executive Director Alex Nerad said. “During our 90th year, we have been working hard to ensure the future of this historic building and receiving this acknowledgement from the State of Illinois has definitely been a highlight of our year.”

To learn more about the history of the Egyptian Theatre and how to support the Theatre as it Expands Beyond 90 Years, visit www.egyptiantheatre.org.

This entry was posted in 90th Anniversary. Bookmark the permalink.