Posted on October 3, 2019 by Egyptian Theatre 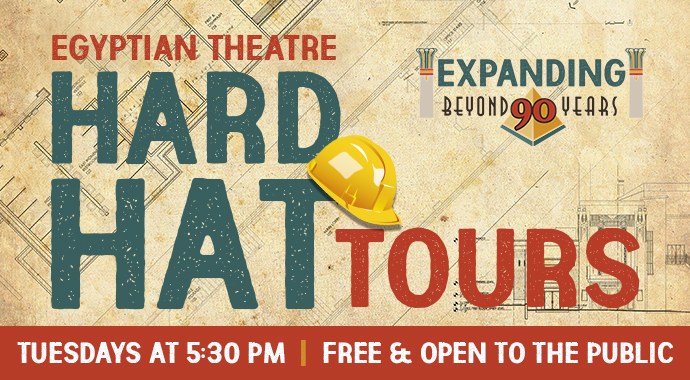 The Egyptian Theatre in Downtown DeKalb is excited to announce they will be hosting free weekly ‘Hard Hat Tours’ as part of their $5.5 million expansion project.

The public is invited to tour the Egyptian Theatre every Tuesday at 5:30 PM starting on October 15 to see the latest construction updates, view projected renderings of the new addition as well as ask any questions of Egyptian Theatre staff regarding the expansion.

The Egyptian Theatre is currently undergoing a two story addition with a basement off the south side of the theatre lobby to accommodate a dramatic increase in restroom facilities, concessions, storage, and for the first time since the theatre opened in 1929…air conditioning.  This will allow the theatre to be open year-round with programming for the first time.  This project will have a substantial positive economic and cultural impact on the community.

The Theatre is currently just over $4 million mark for fundraising for a total project cost of $5.5 million. To further monitor the project as well as donate to this addition, visit lightscameradonate.org. Your support will help us Expand Beyond 90 Years!

This expansion will also significantly improve the ongoing preservation efforts of the historic building that is listed on the National Registry of Historic Places, named in the Top 20 Architectural Treasures by the State of Illinois Tourism, and named 1 of 150 Great Places in Illinois by the American Institute of Architects.

The Egyptian Theatre currently welcomes over 40,000 people through our doors each year.  These patrons come from 36 different states and 47 counties in Illinois resulting in over $2 million in direct economic impact.  Current projections show year-round programming will increase attendance to over 54,000 with a total direct economic impact in excess of $3 million.  This is an increase of 14,000 patrons and $1 million in economic impact.  Those numbers are anticipated to grow through the years as year-round programming ramps up.