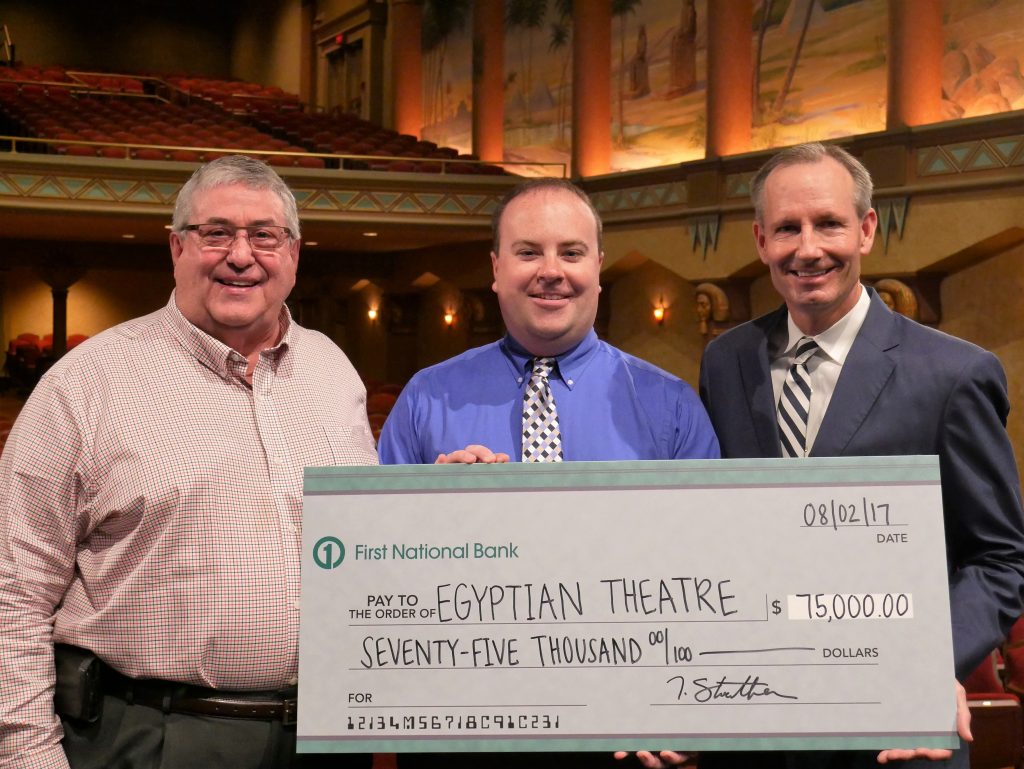 DeKalb, IL – The Egyptian Theatre in Downtown DeKalb is thrilled to announce that First National Bank has committed $75,000 to support programming over the next three years at the historic theatre as an annual sponsor.

Tim Struthers, Illinois Market President for First National Bank, recently presented a check to the Theatre.  “We are delighted to provide this support to the Egyptian Theatre which is a jewel of the community,” Struthers said.  “First National Bank has a history of supporting the communities we serve.  The Egyptian holds such an important role in the greater DeKalb community.  We are excited to provide this funding and hope it encourages others to step up as well so the Theatre can continue to grow upon its success.”

First National Bank was founded in 1857 in the spirit of innovation and commitment to customer service. This sixth generation family-owned business has become the largest privately-owned bank holding company in the United States.  With 14 locations in Illinois, additional locations throughout Nebraska, Colorado, Iowa, Kansas, South Dakota and Texas, more than $21 billion in assets and 5,000 employee associates.

Egyptian Theatre Board President Dan Schewe was present to accept the check from First National Bank and thank them for their support.  “The Egyptian Theatre has quite a legacy since opening in 1929,” Schewe said.  “This increased community support will allow the Theatre to further our mission to share and protect the historical integrity of the theatre as a regional arts center for entertainment and community involvement.”

Once one of over one hundred Egyptian Theatre’s throughout the United States, today the Egyptian in DeKalb is one of only seven remaining and is the only one east of the Rocky Mountains.  With 1,400 seats, the Egyptian Theatre is host to a variety of events every year, including host to over 30 different community organizations.

Alex Nerad, Egyptian Theatre Executive Director, was also present and spoke about the impact of First National Bank’s contribution.  “Thanks to this support, this fall season will be host to a dramatic increase in programming including a variety of film series along with national touring acts,” Nerad said.  “This financial contribution allows the Egyptian to expand its staffing to support the increase in activity.  We know the Theatre provides substantial cultural and economic impact on the community.  We look forward to taking that impact to new heights while providing exciting entertainment.”

The Egyptian Theatre located at 135 N. 2nd Street in Downtown DeKalb, IL is owned and operated by Preservation of Egyptian Theatre, Inc. a 501(c)(3) non-profit organization.  For more information on upcoming events, to make a donation, or to volunteer visit the Egyptian Theatre website at www.egyptiantheatre.org.

This entry was posted in News, Press Releases. Bookmark the permalink.