Our very own Nora Reeves was featured in the Daily Chronicle in a Face Time article. Thanks Nora for all that you do for the Theatre and all the hard work selling thousands of tickets every year! 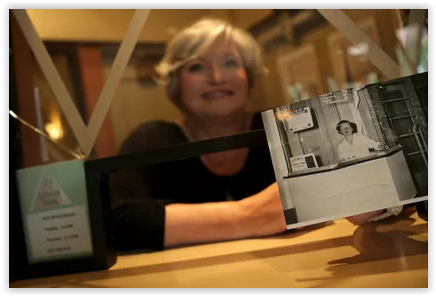 DeKALB – The Egyptian Theatre in downtown DeKalb is Nora Reeves’ home away from home.

Reeves has worked as the box office manager at the theater, 135 N. Second St., DeKalb, for the past three years. Before that, she sold tickets for Stage Coach Players, 126 S. Fifth St. in DeKalb. Even though she’s a ticket seller, she considers herself as being retired from a job at Northern Illinois University. She was born to sell tickets. Reeves has a photo of her mother, Joann Brice, selling tickets in 1949 at a theater in Alliance, Nebraska. Shows were 70 cents for adult admission.

She recently spoke with reporter Andrea Azzo about her job.

Azzo: How did you get into ticket selling?

Reeves: I sold season tickets for Stage Coach Players for about 20 years. Tickets aren’t something a lot of people enjoy doing. It can be complicated dealing with the general public. They all want to sit in the front row. I just enjoyed it at Stage Coach. A friend told me the Egyptian was looking for a box office manager. I applied for it on a whim, thinking nothing would come of it.

Azzo: What kind of people have you met while working?

Reeves: A couple from New Zealand living the American dream. They were both retired and rented a Mustang convertible. They wanted to drive through Route 66. They read about places they had to stop and visit. One was the Egyptian Theatre. That’s one of my most favorite things in the world is sharing the theater with people who have never been there.

Reeves: My all-time favorite was every year, a local dance group does a performance of “The Nutcracker.” One dancer’s boyfriend was serving in the Marines in Iraq. He made arrangements with her parents and the people at the theater to make a surprise return and come out and propose to her. It was so amazing. He walked up on that stage, and she had a look on her face because she had no idea he was even coming back, let alone proposing. Everybody started crying. You think you’re just going to sell tickets, but then you get so involved with everything else that happens around you.

Azzo: How long will you continue working there?

Reeves: As long as they’ll have me. I feel so comfortable there. I’m still learning doing archival research. The building should have been torn down in the ’70s. They had rats, bats and no electricity. But it was saved. I can still sell tickets because I love it there. I’m retired, so it’s the perfect job for me. I’m in the middle of downtown. I have really good feelings for the future of downtown DeKalb. I moved here in 1983, so it’s my adopted hometown. I’m really proud to be part of that.