Posted on November 23, 2017 by Egyptian Theatre

The Egyptian Theatre is proud and thankful for our strong core of volunteers because each individual has such unique experiences and talents. This month, we would like to thank two very special volunteers in particular. Orion Carey works in the finance industry and Dan Woodshank works in the technology sector. Yet, these extremely bright and young professionals still find time in their busy lives to volunteer at the Egyptian Theatre. We recently had the chance to interview this team about their special volunteer project. 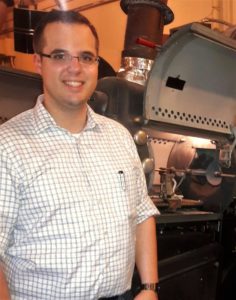 Jesse: What is your favorite part of volunteering at the Egyptian Theatre?

Orion: When the front doors open for a show and the crowd starts to file in, the look on people’s faces when they take in the wonder of our historic theatre for the first time makes me feel great about doing everything I can to make sure the Egyptian remains a focal point of entertainment and pride for our community.

Jesse: How did you become involved with the Egyptian Theatre?

Orion: I ran across an article asking for help to restore and install a classic Wurlitzer Theatre Pipe Organ. By reaching out to the Egyptian’s Executive Director, I discovered the theatre’s heavy reliance on volunteers and just wanted to do my part to preserve Dekalb’s downtown gem. 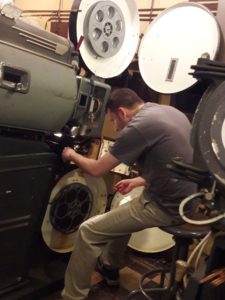 Jesse: Can you explain to our audience what your special project is?

Orion: Yes!! We have taken on the task of restoring the Egyptian’s 35mm projection system to show vintage film, thereby returning a classic cinema experience to the region.

Jesse: What has been the most gratifying part of working on this project?

Orion: Breathing life into this old equipment and being able to return the “Golden Age of Hollywood” to the Egyptian is what I find most gratifying. 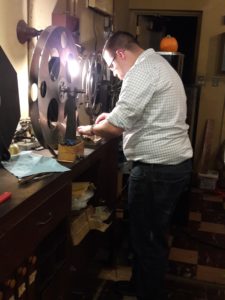 Jesse: How long have you been working on this project, and what is its expected completion date?

Orion: Conservatively, we have spent over 100 hours on this project. But, you have to remember that this is a labor of love and it’s not about the hours. Due to some time-consuming speed-bumps, we anticipate having things ready to roll by the end of the year. It’s hard to set an explicit completion date, though, because the equipment is old and we have testing to go through.

Jesse: What kind of testing?

Orion: First, we have to be fire-inspected. These projection booths seal any potential flames within, and it’s one of our most important next steps if we are going to show nitrate-based 35mm film. We also need to be inspected in order to show archival footage from the Library of Congress whose selection of 35mm films is one of the largest in the world! 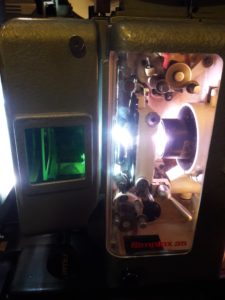 Jesse: How big is your team, and are you looking for further assistance on this project?

Orion: My good friend, Dan Woodshank, is working on the projector-restoration project with me. We outsource for professional assistance when needed but have been handling the vast majority of the work ourselves. There is still work to be done, from simple projects like plaster repair and painting to more complex projects like plumbing and electricity maintenance. We are very fortunate to have knowledgeable people supporting our efforts but are always open to further assistance from interested parties. We are definitely interested in receiving in-kind donations of film and projection hardware.

Jesse: In our world of digital cinema, what effects do you hope your efforts have?

Orion: Foremost, I want to put on a truly great show. But of course, I want the legacy of the Egyptian to live on for decades, and this could be one great way to do that! Finally, I want to make people aware of the art of projecting in 35mm and to inspire the next generation of artists to shoot and project using this medium. As it stands, 35mm projection actually produces a more clear and crisp image than any digital projection system to date. 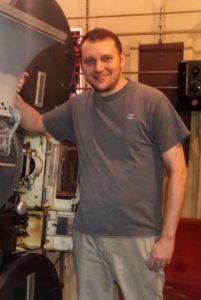 Click here, to learn more about volunteering at the Egyptian Theatre!

The Egyptian Theatre Projection System Restoration Team is currently looking for some specific in-kind donations of projection hardware. If you think you may have such an item, please contact Orion Carey by email at your earliest convenience: [email protected]

Donate Now, to support projects like these, and many more!