Posted on October 1, 2015 by Egyptian Theatre 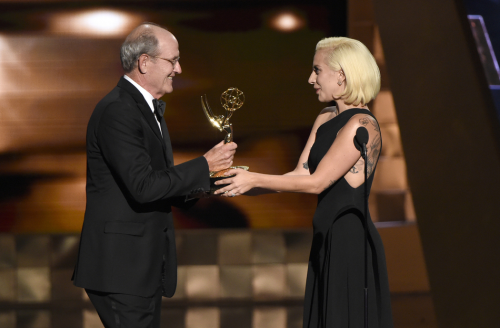 Published in the Daily Chronicle on: Wednesday, September 30, 2015

He was handed his shiny new award by Lady Gaga.

“My thought was, ‘What did you do tonight?’ ‘Well, Lady Gaga just gave me an Emmy,’ ” Jenkins said. “It was done in jest and it’s like saying, ‘It’s an amazing night.’ That was what I was going for.”

Jenkins, a 1965 graduate of DeKalb High School, has been in the acting business for many years now – more than 50 if you count the handful of lines he had in a DHS production of “The Madwoman of Chaillot.”

Many TV shows, movies and an Oscar nomination later, Jenkins, 68, snagged his first major acting award for outstanding lead actor in a miniseries for his role in “Olive Kitteridge,” an HBO miniseries that aired last fall. Jenkins played Henry Kitteridge, a pharmacy owner and the husband of the titular character (played by Frances McDormand) in a fictional Maine town.

He was in good company, as “Olive Kitteridge” won seven Primetime Emmys that night, including ones by series actors McDormand and Bill Murray, as well as nods for writing, directing, casting and editing.

“It felt really good,” Jenkins said. “I have to say, for Frances McDormand, this was her baby. She bought the rights to the book. It was a lot of work to get things on the air.”

The Egyptian Theatre on Second Street reveled in having a DeKalb native take home such a big prize. For about a week after his win, the theater marquee honored Jenkins, and the marquee also congratulated Jenkins when he was nominated, but didn’t win, in 2009 for his role in “The Visitor.” 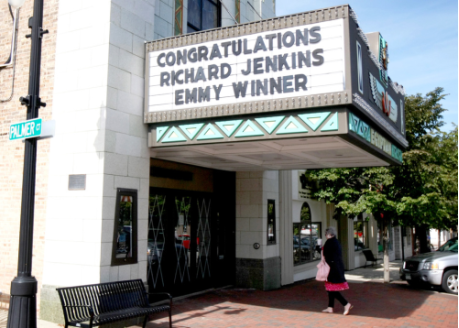 “I grew up to going to the Egyptian,” Jenkins said. “We went to the Egyptian and DeKalb Theater every weekend. It didn’t matter what was playing. That’s how I saw the world, through the movies. I just love the place. My friends worked there.”

Jenkins said his theater-going experience in DeKalb made him want to be an actor, but that career path didn’t take off until his sophomore year of college at Illinois Wesleyan.

Jenkins hasn’t lost sight of his love for the Egyptian. A few years ago, he donated to an effort to replace the seats, and he continues to stay in touch and even occasionally visit, Egyptian Theatre Executive Director Alex Nerad said.

“Obviously, it’s exciting for a DeKalb native to have such huge success on that level,” he said. “He’s long overdue for an award like that. He’s an incredible actor with a long and impressive career.”

That career includes many movies and TV shows, including the dead patriarch of the Fisher family in the long-running HBO series “Six Feet Under,” as well as roles in films including “Friends with Benefits,” “Eat Pray Love,” “Jack Reacher,” “Let Me In,” “The Rum Diary,” “White House Down,” the upcoming “LBJ” and “Cabin in the Woods,” a 2012 horror satire.

“It was a blast,” Jenkins said about working on the 2012 horror comedy. “(Director) Joss Whedon is incredibly imaginative and gifted. I think (the film’s writer) Drew Goddard is going to have a huge future. I love that guy. I respect him enormously.”

Jenkins returned to DeKalb this year to celebrate his 50th high school reunion and as he gets older, he said, it’s been important to keep his DeKalb roots intact.

“I’ve been more in touch the last few years than the early days,” Jenkins said. “I don’t know why. Maybe you start to look at life more as you get older, and realize how important that time was to who you are now.”