Backstage at the Egyptian: Interview with SFC Ward Yager

Posted on November 8, 2017 by Egyptian Theatre 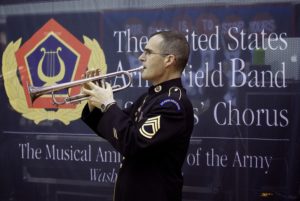 Jesse: What inspired you to become a musician? A soldier?

SFC Yager: I come from a very musical family and knew by high school that music would be my profession. I also learned about the military as I grew up, because my father is a graduate of the United States Military Academy at West Point and served in Vietnam. He instilled in me a sense of devotion and service to my family, job, and community. It turns out that performing music while serving my country is a great way to make a living!

Jesse: The US Army Field Band has been active since 1946 and is charged with some incredible responsibilities. What does it mean to you to be a part of this historic and iconic band?

SFC Yager: I feel extremely lucky to be a part of such an amazing organization. We have the honor of representing our fellow Soldiers and giving the American people a face-to-face experience with their U.S. Army. It’s a mission we take to heart.

Jesse: This band plays mostly easy listening, classical music. But, do the band members like to practice by playing music that doesn’t make it into the show?

SFC Yager: We come from a huge background of musical styles and experiences, so it’s not uncommon to find us performing all types of music on our own time. The Army Field Band also has an active Chamber Series, where we perform solo and chamber works that allow us a different type of musical outlet as we perform for our local communities.

Jesse: How many soldiers will we have performing on Saturday night?

SFC Yager: The Concert Band consists of approximately 65 members, and the Soldiers’ Chorus has about 25. We also travel with three officers, six professional drivers, three buses, seven vans, a semi-trailer truck, and a shorter box truck. It’s a real convoy!

Jesse: The Egyptian Theatre hosts a lot of live-events throughout the year. What part of your show do you see as a differentiating factor from other shows?

SFC Yager: The connection we have with our audiences is unique. I have seen Veterans who require wheelchairs find a way to stand when we perform their service song. Other audience members rush to speak with us after concerts to share their loved one’s military story, many times with tears in their eyes. These experiences happen all the time, and each is as inspiring and powerful as the last. 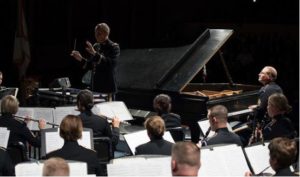 Jesse: Is there a particular feeling you want to leave the audience with at the end of the night, considering it’s a very special Veteran’s Day show?

SFC Yager: We want you to be proud of your military and the men and women who have dedicated themselves to protecting our freedom. And if you’re entertained and enjoy the music, we’ll take that, too!

Jesse: DeKalb is a small, heartland USA community. Does the band have a particular favorite pastime when in small towns like DeKalb?

SFC Yager: I grew up in small towns, so I always enjoy the familiar feeling when we stop in smaller communities. The band also frequents local restaurants, and small towns usually have many gems that we seek out and return to many times! 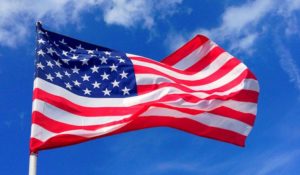 The Egyptian Theatre thanks all United States military personnel for their service, and a special thank-you to SFC Ward Yager!

Click here, for more information about upcoming events at the Egyptian Theatre!

Do you want to take a virtual tour of the Egyptian Theatre before you get here? Click here to do so!

Donations support the ongoing operations of this historic-site. Click here to donate now!