Backstage at the Egyptian: An Interview with Lynnae Ihm of Children’s Community Theatre

Lynnae Ihm is the current president of Children’s Community Theatre in DeKalb, IL. The cast of Oliver saw over 1700 patrons from the community!

Brandon: Tell me a little about Children’s Community Theatre (CCT) and what they do.

Lynnae: CCT was founded on September 17, 1955. For more than 50 years, the organization has presented many great musicals for community children.  It’s summer theatre arts training program, “Imagination Camp” has helped numerous children and young adults learn the ins and outs of dramatic performance and putting on a musical production. CCT is dedicated to the development and fostering of an interest in dramatic arts among people of all ages and abilities, but especially children and young adults. We seek the creative expression of those arts and the encouragement and appreciation of community participation in all of the theatre’s activities. CCT has, since 2006, become home to many creative outlets and subsidiary groups including: CCT’s Spring family show, CCT’s Imagination Camp, CCT’s Stage right show, CCT’s Penguin project and CCT’s Penguin players. The CCT Board of Directors encourages all directors to cast as many individuals as possible in each production. However, our organization has grown so much since our reorganization in 2005, that it is not always possible to give everyone a role. We encourage all children to participate in our summer “Imagination Camp” theatre education program. 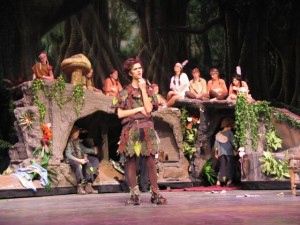 Brandon: How long have you been with CCT? When did you become president?

Brandon: Why is performing at a historic theatre such a great opportunity?

Lynnae: Since our organization doesn’t have a theater of it’s own, we rely on many theater groups and theaters through our community.  We try to always do our family show at this great theater.  It is a location that is well know in the communities. And the Egyptian theatre provides a great atmosphere for the audience  to enjoy a night out at the theater. 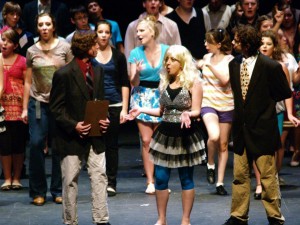 Pictured Above: Legally Blonde The Musical

Brandon: Why is it important for people, children specifically, to participate in the arts?

Lynnae:  I feel that it is very important to expose children to theater.  Both being in the cast as well as being an audience member.  We have seen children grow into amazing actors.  All people are accepted. Over the course of the few months of practice the cast becomes like family. The family show bring dad’s and mom’s with their children to do a production together,  it is a great way to do an activity together as a family.

Brandon: How are shows determined each season?

Lynnae: The process of picking a show depends on the which of our groups are choosing a musical.  We look for shows that would get people to come audition for it.  Once we find a director for the show.  Then we start looking at scripts.  We look for musicals that have a lot of parts, fun music, and a good plot.  For Oliver we picked the show back in June.  For our Penguin project shows in September there is a group of five people who get together in January and pick the show based again on number of parts, music and plot.  The summer camp show is picked by December usually.  We try to make sure at the time we pick that no other theater groups in DeKalb area are doing that show.

Brandon: What is the biggest challenge CCT faces in getting people to attend shows?

Lynnae: We rely heavily on word of mouth.  Yes we do advertisement but with our limited budget we can only do so much.

Brandon:  How often does CCT have shows?

Lynnae: We have the Family show in March, the Summer camp show in July, the Penguin Project show in September and the Penguin players shows in May and December.  In  the past we have had our stage right show (teens and older) but we haven’t had one of those in a few years. 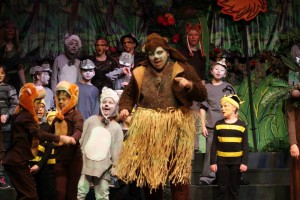 Pictured Above: The Jungle Book

Brandon: What is the next show CCT will produce? When?

Lynnae: Our upcoming season will be:
Penguin Players in May is doing songs from Sound of Music
Summer camp in July is doing an Incredibles superhero camp for the beginners and Little Mermaid for the Advanced camp. Penguin Project is doing Shrek the Musical in September.

Brandon: What is one thing you’ve learned about the production of Oliver?

Lynnae: Oliver has been fun to see come together.  The accents are fun, the cast does a wonderful job with them.  On the production side of things I have seen many people come together to put many hours of work into the final product.  I think the end result is great.

Check out Children’s Community Theatre online to see what fun and exciting events are coming up.