Backstage at the Egyptian with Gio Bianchi of Children’s Community Theatre Frozen Jr. 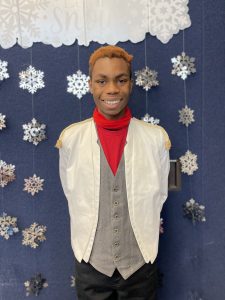 GIO: I have been performing for 12 years now and I started CCT 9 years ago in their production of Jungle Book.

E: What part do you play in this show?

G: I play Prince Hans of the Southern Isle.

E: How long have you and your fellow performers been preparing for this show?

G: We’ve been preparing for this show for 3 months now, we started the first week of February.

E: What are you most excited about when it comes to performing in the Egyptian Theatre?

G: Performing at the Egyptian Theatre feels like coming home in a way. I am always excited to just see the stage and be on it because it brings back so many memories from when I first started performing there and as I get older it feels like the stage is getting smaller and smaller because I really have grown up on it and experienced so much on it.

E: What is your favorite performance memory?

G: My favorite performance memory is the first time I got to perform with my sister in Peter Pan back in 2014. I had to chase her out on stage because I was Slightly,one of the lost boys,and she was an Ostrich that I was supposed to try and catch. It was her first time on stage and she was a bit nervous and she just had to stand there by herself in the center of the stage and then she just looked at me right on stage, decided to break character, and  give me a thumbs up and I always remember that for some reason because it was just so adorable and made me want to laugh onstage.

E: Do you or your fellow performers have any pre-show rituals that help you get ready?

G: A lot of the older kids that I’ve been friends with for a while like to imitate the getting ready scene in High School Musical and do vocal warm-ups or we like to do shakeouts. Pre-show is really just a lot of relaxation.

E: Are there any future performances are you looking forward to?

G: I am really looking forward to doing Chicago! It’s such a good show and it’s a lot more adult and focuses on darker themes which are the kind of shows I’m trying to focus on from now on in the future.