Backstage at the Egyptian with Drew Lynch 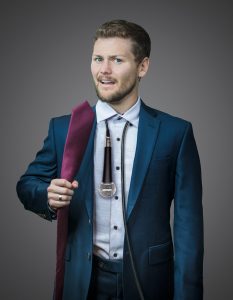 ERIN: How did you get started doing stand-up comedy?

DREW: When I was 19, I moved to L.A. to become an actor. While pursuing that, I worked at a comedy club that had a softball team. I got hurt during a game and suffered a traumatic brain injury. After that, no one would hire me as an actor and my representation dropped me. I used the injury that impaired my motor skills and ability to communicate and I started making jokes about it as a form of therapy and healing.

E: What was it like being on America’s Got Talent?

D: I loved being on America’s Got Talent because I was genuinely surprised every time I got voted back. I never imagined going as far as I did, so when I ended up being one of the last two people, it was just the icing on the cake at that point. Howie Mandel is someone that I respect and someone whose comedy also comes from his demons. We both used our darker pasts to manifest positive paths. It was really cool to have him there mentoring me along the way.

E: What are you most excited about in regards to performing at a historic theatre such as the Egyptian Theatre?

D: Any time that I get to perform at a place that has history and a sense of community, it’s exciting. I’ll perform anywhere. I’ve performed in hospitals, Korean BBQs, and living rooms so a theatre seems pretty nice! LOL.

E: How long have you been preparing for this tour?

D: I think when you make it to the 10-year mark, you’re almost never not prepared for anything. You’ve been in so many different environments by then. Stand up is such a moving target. It kind of feels like, “Okay, I did a special last year. It was about the pandemic and its effects on my health and my mental well-being.” Once you do that, you dump all that material and you evolve to the next phase which is starting everything over from scratch, evaluating where you’re at, and seeing how it translates. That’s where I am and I’m excited for it.

E: What can people look forward to hearing about in your show?

D: I think there is an interactive component to my show. People know that with live performances anything can happen, and I welcome that format. It’s a combination of seeing how the audiences feel, testing out the waters, and bringing what I want to say.

E: Do you have any upcoming shows that you are looking forward to?
D: The United Kingdom shows! I love traveling internationally and to see where I started here in the continental United States evolve to these international locations is so cool and it shows me that I’m making an impact in different parts of the world.