Backstage at the Egyptian: We Welcome Tony Lewis and Tom Stevens from the Dean Martin and Jerry Lewis Tribute Show

Posted on November 2, 2015 by Egyptian Theatre

The Dean Martin and Jerry Lewis Tribute Show is a show in a class all its own. Never have two artists captured the very essence and chemistry of the celebrities they perform as have Tom Stevens and Tony Lewis. These two incredible performers have each had success on their own. This show guarantees to leave your audience, whether it be a casino venue, local theater, corporate event or private party, hanking you for a night of laughter, great music, and true professionalism at its best.

Brandon:
What inspired you to become a Jerry Lewis Tribute Artist?

Tony: As a young stand-up comedian who did a host of voices, my favorite impression was Jerry. From a very young age people would always comment on how much I looked like Jerry. He became my core character in my show and I never looked back.

Brandon: What has been the hardest obstacle for you to overcome?

Tony: The hardest obstacle to overcome is not to laugh or change our routines spontaneously when working with Tom. Tom and I naturally crack each other up so we divert our script when the opportunity presents itself and then we try and find our way back into the dialogue without the audience realizing we are lost.

Brandon:  Of all the performances that you have done, do you have one that stands out as being the best or as being your favorite?

Tony: The stand out for me was working at the Niagara Casino with Tom. We sold out the show and they brought in 200 extra plastic chairs for further ticket sales. The tour of laughter from that crowd was affirmation that people remember and love Martin and Lewis.

Brandon: If given the opportunity to ask Jerry anything, what would you ask him and why?

Tony: I would ask Jerry how he feels about modern day comedians and his take on their material. I would ask this because I am curious on his thought process regarding the approach of a comic in today’s world as opposed to his classic training in vaudeville/ burlesque. 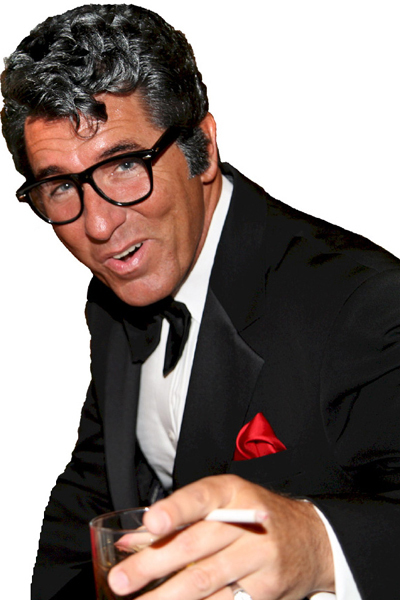 Brandon: What inspired you to become a Dean Martin Tribute Artist?

Tom: I have been such a Dean Martin fan ever since I was a child and my most precious memories are remembering watching the Dean Martin show every Thursday night and watching my Dad laugh so much at Dean. I started trying to sing like him when I was around 14. As I grew older I started to make myself look like him. It all fell into place and then when I met Tony he complimented my Dean and I his Jerry. When we appear together our act is immediately brought to a whole new level.

Brandon: What has been the hardest obstacle for you to overcome?

Tom: The hardest obstacle in my opinion was creating a show that brings to the stage not only the amazing chemistry that Dean and Jerry had with each other but also the amazing things they did after they split up. Bringing into the show all the characters Jerry created as well as Dean’s TV persona as a single act. The show has morphed several times over the three years we have been together. But now it’s a gem.

Brandon: Of all the performances that you have done, do you have one that stands out as being the best or as being your favorite?

Tom: Our best work was at the Crown Casino in Melbourne when we worked with a seven piece band. Having the guys up on stage with us laughing at our antics was spectacular.

Brandon: What do you enjoy most about performing?

Tom: I enjoy standing next to Tony knowing he has my back and I have his. We can go anywhere and the other follows. He makes this fun and the audience sees that and just come along for the ride.

Brandon: Have you ever visited the Egyptian Theatre before? Is there anything special about performing in a historic theatre?
Tom:  This will be our first time in the Egyptian Theater and we love the old classic theaters…it’s like we are transported back to when Martin and Lewis were on top of the world.

The Dean Martin and Jerry Lewis Tribute Show is coming to the Egyptian Theatre on Saturday, November 7th, 2015 at 7:30PM. Doors to the theatre will open one hour prior to the start of the event. Visit our website for tickets and more information about this event as well as upcoming events.