Backstage at The Egyptian: An Interview with Betsy Hendrey from The Confectionary

Betsy and Todd Hendrey own The Confectionary in both Downtown DeKalb, IL and Sycamore, IL. This has been a family owned business since Tom’s parents first opened shop in 1982. In 2012 business transitioned from Todd’s parents, Tom and Sharon, to Todd and Betsy. Betsy and Todd are proud supporters of the Theatre. This week’s Backstage at The Egyptian features an interview with Betsy! 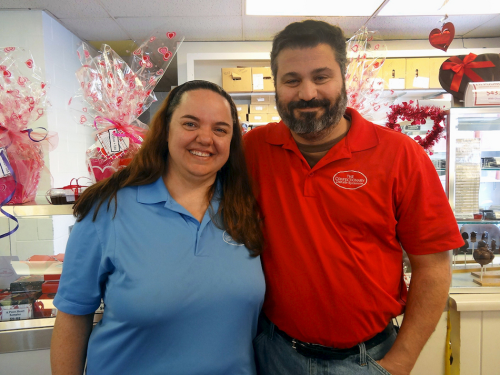 Brandon: What do you like most about this time of year?

Betsy: During the fall we make caramel apples!  They are very popular with local residents and it’s really fun to see how excited people get when we start making them!  It’s like a happy explosion in our store.  It’s really fun!

Brandon: What is your best seller at The Confectionary? What is your favorite item that you sell currently or have sold in the past?

Betsy: Our best seller is definitely the Sea Monster, which is our version of the turtle.  This is pecans, caramel and chocolate.  What sets ours apart are the quality ingredients we use, which includes our own caramel made from scratch.

Brandon: What is the history of The Confectionary as well as your involvement?

Betsy: The DeKalb Confectionary began in 1982 with Tom & Sharon Smith.  Sharon’s son, Todd Hendrey, opened his Sycamore location in 1994, and his wife, Betsy, joined the family business in 2012 when Tom & Sharon retired.

Brandon: Have you ever had the opportunity to perform? If so, what? If you could possess one talent that      you may not already, what would it be and why?

Betsy: Yes, I have performed in the past.  I was actually a theatre major in College, though now I prefer writing as opposed to performing.  If I could posses a talent, I would like to be able to sing.  I can’t carry a tune at ALL!

Brandon: What are a few of your favorite events from attending the theatre in the past?

Betsy:  I’ve enjoyed so many events at The Egyptian over the years.  The one that stands out the most would have to be Rick Springfield.  I won tickets to the meet-and-greet after the show and it was very exciting to meet someone whom I’ve admired for so many years.

Brandon: What is one thing you always tell your customers about the theatre?

Betsy: I’m a huge supporter of the theatre, not only because their events have a positive impact on my business, but because I believe that having affordable cultural activities available to the community is beneficial to everyone.  I grew up in a town with no theatre at all.  The theatre here in DeKalb is a local treasure that is the central hub of culture in our community.  I think once people attend an event there, they understand how neat it is to have this hidden treasure right here in our town.

Take a look for yourself to see what The Confectionary has for you! We at the theatre love being welcomed by the sweet smell of fresh caramel in the morning!