Backstage at the Egyptian: Orion Carey

Posted on October 9, 2019 by Egyptian Theatre

35 MM film if the film gauge most commonly used for motion pictures and chemicals still photography. The name of the gauge refers to the width of the photographic film, which consists of strips roughly 35 millimeters wide. The 35 mm width, originally specified as ​1 3⁄8 inches, was introduced in 1892 by William Dickson and Thomas Edison, using 120 film stock supplied by George Eastman. Film 35 mm wide with four perforations per frame became accepted as the international standard gauge in 1909 and remained by far the dominant film gauge for image origination and projection until the advent of digital photography and cinematography, despite challenges from smaller and larger gauges, because its size allowed for a relatively good trade-off between the cost of the film stock and the quality of the images captured.

While 35 MM movie projection was once the only motion picture format that was able to be played in almost any cinema in the world, digital projection has largely superseded it in the 21st century. Through the gracious help of Orion Carey, the Egyptian Theatre is able to help project and play these iconic 35 MM films within the Theatre so that the art of 35 MM will not become a lost art any time soon. Through Carey’s hard-work and volunteerism, the Theatre is able to return a classic cinema experience to the region. 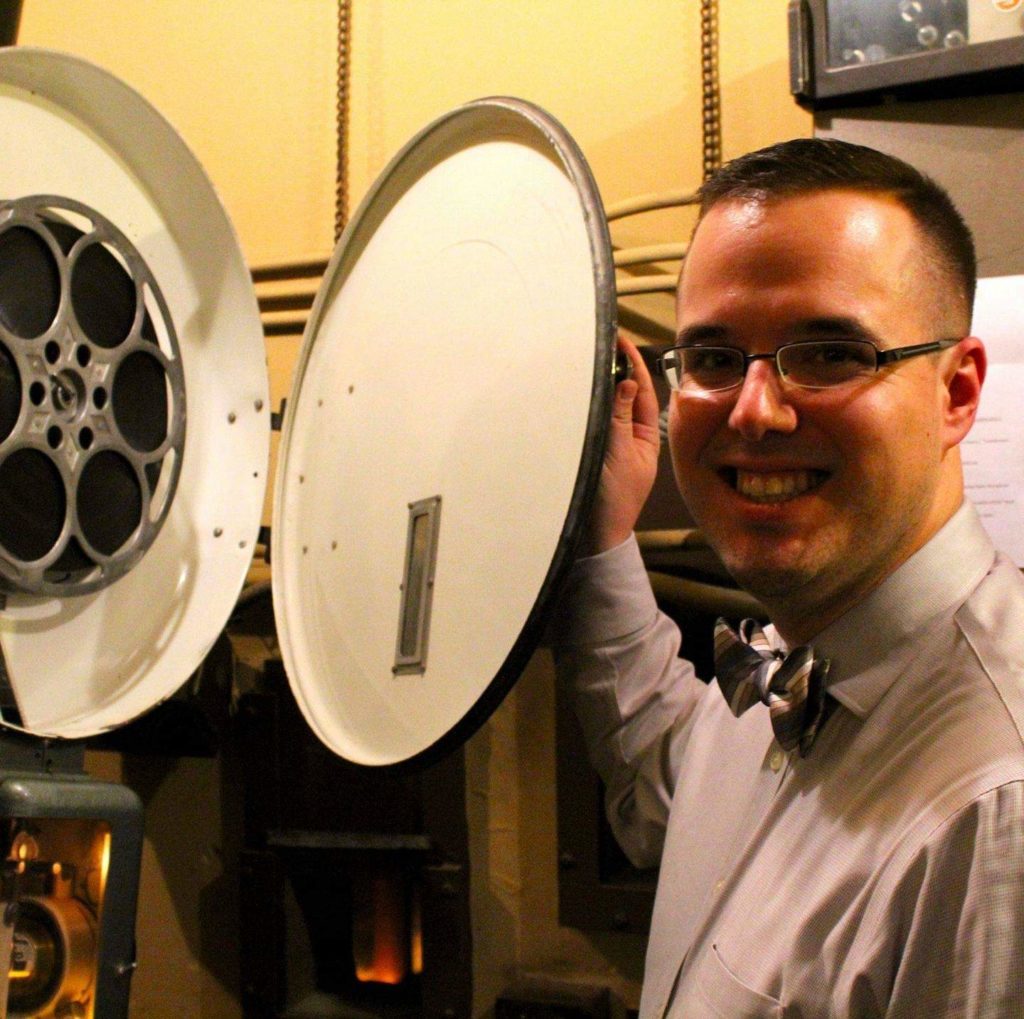 (Brooklynn) When did you first start volunteering at the Egyptian Theatre?

(Carey) I have been working with the Egyptian since 2015 when I first approached Alex with my desire to assist with bringing a Wurlitzer Theatre Pipe Organ back to our theatre.

(Brooklynn) What is your favorite part about volunteering at such a historic site such as the Egyptian Theatre?

(Carey) I can’t choose just one part as a favorite. I have been fascinated by history and historic architecture as long as I can remember. I have a strong affection for the Egyptian specifically because it has been there to entertain 5 generations of my family and is an enduring monument to our great community in DeKalb.

(Brooklynn) How were you first introduced to 35 MM films? How did you become involved in showing 35 MM films at the Theatre?

(Carey) Well, I was introduced to 35mm simply by going to the movies while growing up. My grandmother, Roxy Carey, took me to the movies almost weekly as a child during summers. I was always fascinated by where the movies were coming from and spent quite a bit of time staring up at the projection booth, wondering what was going on up there to make the magic happen.

(Brooklynn) What has been your favorite film to show as a 35 MM? Why?

(Carey) That’s a really tough question to answer as most of the films we show in 35mm today are classics and extremely famous. Of just the films we’ve shown for the Egyptian, I’d have to say that showing “Wizard of Oz” for its 80th anniversary was the most impactful to me. The honor of showing one of the most influential films of all time for its anniversary screening, in its original format and in a historic movie palace was truly an emotional experience.

(Brooklynn) What is the process of showing a 35 MM film?

(Carey) There is a LOT that goes into presenting a film in 35mm. It isn’t simply turning on a computer and hitting “play”. From inspecting the film (10x2000ft reels in the case of 2001: A Space Odyssey) to threading the projectors to timing curtain movement and beyond, the job of a projectionist is to provide the audience with the absolute best show possible. We splice together film with special tape to provide a period specific pre-show before every feature usually consisting of vintage commercials, cartoons and news reels.

(Brooklynn) In a world of digital cinema, do you fear that the showing of 35 MM films might one day become a lost skill?

(Carey) Actually, this happened in about 2005. What we are seeing now is a resurgence of people that want to save cinematic history and see motion pictures on celluloid film. Small independent cinemas around the world are finding that showing films on celluloid and providing a true cinematic experience is really drawing crowds.

(Carey) There are many differences. The two that I like to point out are picture quality and light. We are extraordinarily fortunate at the Egyptian to have the ability to show films using a carbon arc light source. Carbon arc is the original light source for showing film and has a noticeably more “lifelike” quality than modern projection. Digital films are also subject to pixel count, 35mm will always provide a clearer and more crisp image.

(Brooklynn) If there’s one thing that you wish all people knew about the art of 35 MM films, what would that be?

(Carey) That like all forms of art and history, it deserves to be seen, preserved and appreciated. The Egyptian Theatre was built specifically for the purpose of motion picture exhibition and I’d like people to know that what we are doing is true to the heart of our downtown gem, helping remember the past and also educating the future.