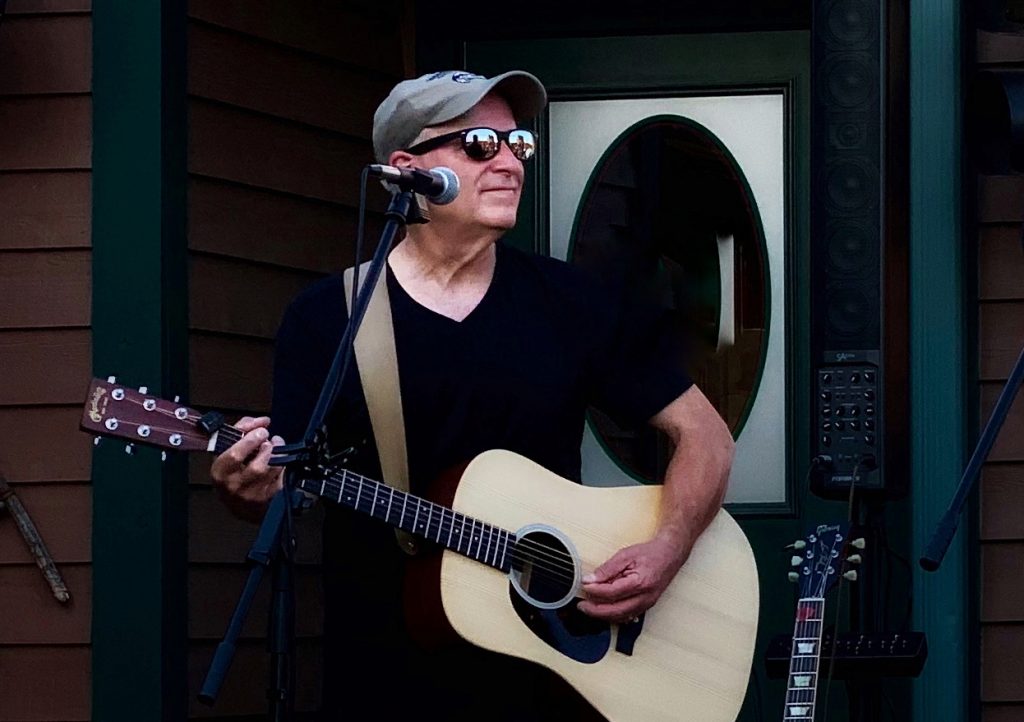 Bob Palmer will be our second performer at the DeKalb Farmers’ Market Live Lunch Music Series. Bob has been performing in the Chicago area since the early in 1970s and currently performs locally at various venues and events. As a guitarist and singer, he performs cover songs and several original songs, with some influencers including James Taylor, Eric Clapton, Duame Allman, Joe Walsh, Jimmy Pag, Jimi Hendrix. Over the years, he has had the opportunities to perform with bands such as the Outlaws, the Ozark Mountain Daredevils, Foghat, and the Byrds. Come listen to Bob perform live on Thursday, June 10th from 12:00pm-1:30pm in Van Buer Plaza.

When did your passion for playing the guitar and singing begin?

My father, Jay Palmer, is a singer and guitar player who performed in Chicago just after WW-2 around 1948. He began teaching me guitar when I was about eight years old. His was a musical family. All of his siblings including his mother played piano and various other instruments including guitar, banjo, and mandolin. Jay was the featured guitarist and singer in The Chicago Mandolin and Guitar Orchestra during the late 1950’s and early 1960’s. Currently residing in Janesville, Wisconsin, he turns 94 later this month and still performs regularly with The Blue Velvet Orchestra.

What genre(s) of music and atmosphere should an audience expect when they come to watch you perform?

I mostly perform popular music from the 30’s/40’s and 60’s/70’s along with some acoustic translations of Classic Rock songs from the 60’s/70’s by artists like The Beatles, James Taylor, Jim Croce, The Eagles and Bob Dylan. Although I perform mostly covers, there are a couple of original songs I perform on occasion as well.

I try to create a fun atmosphere by playing what I hope have been people’s favorite songs throughout the years. I believe much of the music I perform, especially songs by groups like the Beatles cut across generations and therefore, help me appeal to a wide range of ages.

What was the first venue you performed at and what was your favorite venue?

My first venue ever was performing the song Satisfaction by The Rolling Stones to my classmates in grade school with a friend who was learning to play the drums; probably fifth/sixth grade? If you’re familiar with the song, you’ll know that some of the lyrics are totally inappropriate so I’m surprised we didn’t get in trouble for singing it. However, it was the 1960’s and I suspect my teachers were more concerned about the length of my hair rather than what song I was singing!

My favorite venue (Aside from performing at Tapa La Luna here in DeKalb!) was probably the first steady gig I ever had in Chicago during the 1970’s. A small neighborhood bar at 69th and Pulaski on the south side called Shagnasty’s. It lasted about five years (2x/month) until I went away to college down state. Kind of a “Cheers” type venue… everybody knew your name, etc…

What are some of your most memorable moments while performing?

There have been quite a few but probably the times I’ve performed with my family are the most memorable. All of my children are musically talented and we often get the chance to perform together as a band called The Dreadnaughts. Also, my father will join us on occasion and that’s always special. In addition, the opportunities I’ve had to “open“ for some of my favorite bands have been a lot of fun as well 🙂

How has COVID-19 affected you as an artist and the performance atmosphere?

When COVID-19 hit, I was performing 3-5 nights/week. It all came to a grinding halt within a couple of days! It was a struggle to stay rehearsed and so early on, realizing a need for a more strict rehearsal regimen, I converted a room in my house to a mock performance space. This has really helped so I’ll continue rehearsing in this manner until things revert back to normal.

As a result of the mass vaccinations… myself included, I’ve just started doing gigs again. However, I’m limiting my bookings to outside venues only until things stabilize some more. The DeKalb Farmers Market on June 10th will be one of the first!

Do you have any advice for musicians who are nervous to perform for a live audience?

My best advice for anyone starting out performing live is this… No matter what you’re doing musically, totally commit to doing it. When you’re performing, people experience your confidence more than anything else. Whatever it is you do, believe in it and sell it like it’s the thing that’s been missing from their lives!