Backstage at the Egyptian: Leslie Cullen of The Paragon Ragtime Orchestra

Posted on September 28, 2022 by Egyptian Theatre 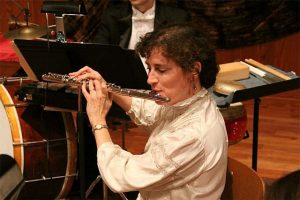 KARYN: For readers who may not know, what is the “Ragtime Era”?

LESLIE: The term refers to early 1900’s  America, a very exciting period of expansion, exploration, and inventions. It was also the period when America began finding its own expression in art form such as music, rather than just replicating European models. Popular music from the ragtime era is notable also for being a merging of cultures through the mingling of immigrants, with African, Irish, German, and Jewish influences influences in the highest percentage.

K: What drew you to performing with a ragtime orchestra?

L: The joyfulness and range of expression of the music, and the idea that not too many other people are playing and preserving it. It is important work.

K: What makes your shows stand out?

L: The particular show we are doing at the Egyptian features silent films with live orchestra accompaniment, done in a more historically authentic way than you can hear anywhere else on the planet. We are playing the original music cues (scores), using with the authentic instruments, and syncing it all up perfectly to the action on the screen – all in an historically correct venue. It is as close to time travel as you can get!

K: What excites you about performing at a historic venue?

L: Historic theaters are the ideal setting for our orchestra because they were built during the same time as the rise of the American theater orchestra, vaudeville, and silent movies. They are also more visually interesting than most modern performing arts centers, and the acoustic is perfect for unamplified sound.

K: What is special about performing for a live audience, compared to a recording studio?

L: A live audience give energy back to you. A great show has back and forth flow between performer and audience. A recording studio can’t give you any of that.