Backstage at the Egyptian: Kyle Stong of Think Floyd USA

Posted on November 5, 2019 by Egyptian Theatre

Think Floyd USA’s philosophy is to practice so thoroughly that the music becomes second nature, allowing the performers to deliver an unforgettable experience to the audience, which often includes beloved fans who have seen the show time and again (and whom the performers know by name and enjoy talking with each other after the show). 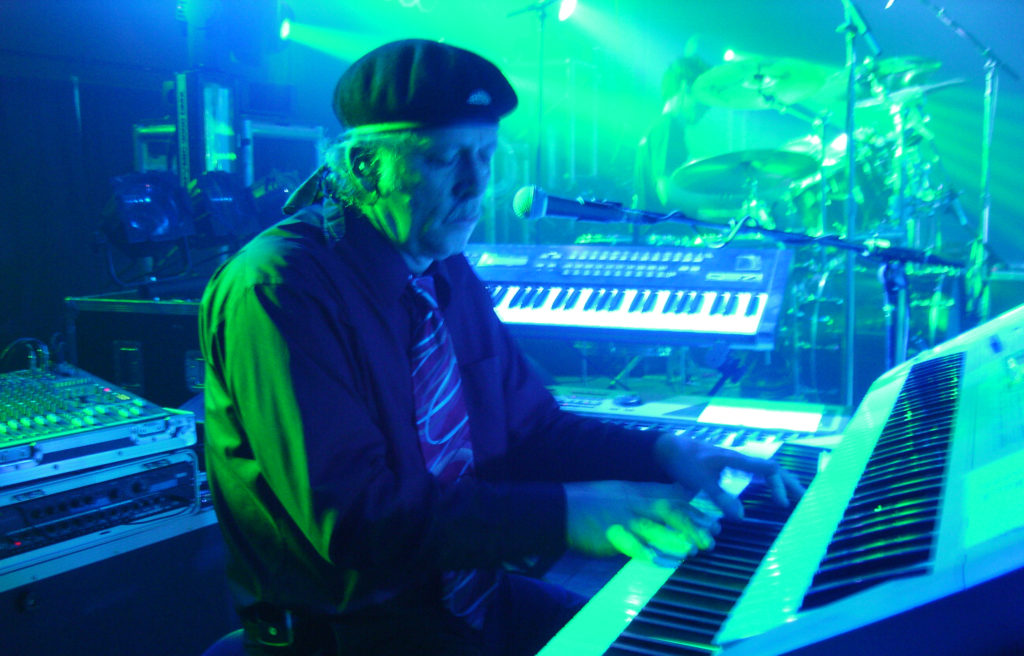 (Brooklynn) How did Think Floyd USA initially come together to form the band that audiences see on stage today?

(Kyle) Think Floyd USA was originally one of the top Chicago area cover bands called Igneous Biscuit that performed a lot of Pink Floyd in their sets among other musical selections from the likes of Aerosmith, UFO, Sabbath, and more. It wasn’t until 2004 that we decided to switch to 100% Floyd music and we then changed our name to Think Floyd USA, and now we are the original and longest running Floyd tribute in the Chicagoland area.

(Brooklynn) Think Floyd USA has played many exciting shows since 2004 throughout the Midwest and the Chicagoland area. What have been some of your favorite venues to play at and why?

(Kyle) We have been truly blessed to perform on some of the finest and most historic stages, venues, and fests throughout the Midwest and beyond. Think Floyd USA has traveled as far as Nevada to the West, and Tampa Bay Florida to the South. In 2020, we will be bringing our show to upstate New York… With regards to shows in our past, in particular the Surf Ballroom in Clear Lake Iowa (the same venue Buddy Holly played the night he got on the airplane); Summerfest in Milwaukee, Wisconsin (we were the first cover band to ever headline Summerfest on a weekend night); Val Air Ballroom in Des Moines, Iowa; National Cherry Fest in Traverse City, Michigan; the Park West, Chicago, Illinois, Iowa State Fair; Meyer Theater in Green Bay, Wisconsin; 7 Flags Event Center, Clive, Iowa, the final show before closing at the Capitol Theatre in Davenport, Iowa, headlining “The Great American Tribute Fest” at the Sandstone Amphitheater in Kansas City, MO in front of thousands, just to name a few…and of course, the Egyptian Theatre. Think Floyd USA was also one of the first bands to do a themed sea cruise through Carnival called “Great Gig in the Sea” back in 2008, which was a huge success.

(Brooklynn) What about playing for a crowd at a historic venue such as the Egyptian Theatre excites the band?

(Brooklynn) Pink Floyd is known for popular rock songs such as “Wish You Were Here” and “Another Brick in the Wall.” While performing as Think Floyd USA, what are some of your favorite songs to play?

(Kyle) While, of course, we do have several “Free Bird” songs–songs that you don’t necessarily want to play again and again and again but have to or else the audience will “kill” you; songs like” Wish You Were Here” and “Comfortably Numb.” Regardless, we do still enjoy performing those songs simply because the audience loves them and sing along, and in many cases, certain songs will bring back personal memories to audience members. One fan on our Facebook told us recently he loves “Great Gig in the Sky” because he “buried his wife to that song.”

As for the band though, most of the band’s favorite songs are more of the deeper cuts, such as “Echoes” (my personal favorite), “Hey You,” “Mother,” “Pigs,” and the occasion SUPER deep cut such as “Fearless” or “Wot’s… Uh the Deal?”, “Astronomy Domine,” and “Fat Old Sun.”

(Brooklynn) Overall, what are some of your favorite parts about touring/performing?

(Kyle) Performing on stage in front of our fans (and Floyd fans in general) is 150% our favorite part. The touring, driving, setting up and tearing down is a lot of WORK, which we couldn’t do without the support and help of our crew, along with the incredible staff and helpers at all the venues we have been honored to grace throughout our history. Performing is our reward for all our hard work before and after the shows. I would also like to point out that when you have been together for as long as we have, we have become more than just a show band. We are more of a family that enjoys our time together. Now, on the more humorous side of touring, the band DOES regularly explore local favorite eateries and restaurants from watching TV shows like Diners, Drive-Ins and Dives.

(Brooklynn) What have been some of your most memorable moments while on or off stage?

(Kyle) Think Floyd USA has had the honor of opening for a lot of famous world and national acts including Dickey Better, Toto, and The Zombies, just to name a few. For me personally, getting to meet Rod Argent from The Zombies was one of my personal top moments. As a band, one of the most memorable moments were headlining on a Saturday night in front of thousands at Milwaukee’s Summerfest. Other favorite moments would definitely have to include returning to the Egyptian for our 5th year in a row. Thank you Alex and Kody at the Egyptian for all that you do!

(Brooklynn) What should audiences expect to see when they come to watch Think Floyd USA perform?

(Kyle) I tell people this all the time. Think Floyd USA is NOT a band. Think Floyd USA is a SHOW. Audiences will experience a fully choreographed concert production complete with full laser light show, video, and assorted special effects and theatrics. It is also important to note, that Think Floyd USA is a CELEBRATION of the music of Pink Floyd, and not necessarily a clone band. Unlike 99% of all other performing Floyd tributes, Think Floyd USA concentrates on the performance of the music being performed first, because if the music isn’t good, it doesn’t matter how good your light show is. Let’s all remember, it has always been the music of Floyd FIRST that has attracted listeners. All the amazing lights and bells and whistles that come along are the icing on the cake. As for the upcoming show on November 9, we are excited that this will be our biggest production ever at the Egyptian.

(Brooklynn) If there is one thing that viewers should take away from the show, what would that be?

(Kyle) FUN! Viewers will have FUN and leave the theatre with a smile on their faces, knowing they saw a show that was musically on point, visually exciting, and just FUN to be a part of.

* Some answers have been edited for clarity.