Backstage at the Egyptian: Jeanine Holcomb of PB&J 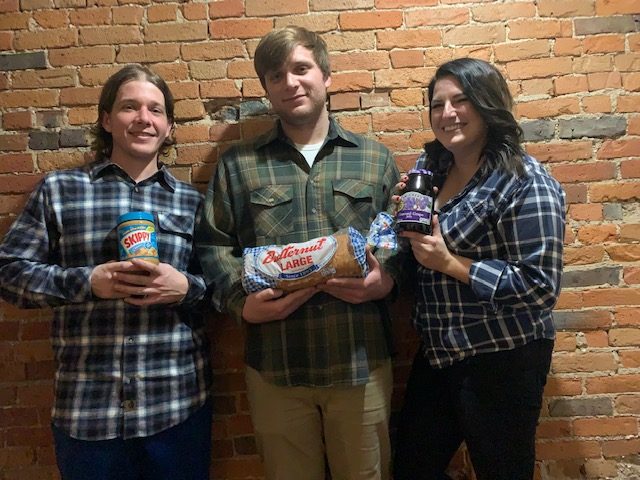 Our third performer at the DeKalb Farmers’ Market Live Lunch Music Series is PB&J, a local DeKalb band. Peter Lindsey, Ben Roettger, and Jeanine Holcomb have been friends for a while, but the formation of PB&J didn’t occur until 2018. As staff members and friends of the Egyptian Theatre, live performance has a special place in all of their lives. This being their second live performance ever, PB&J is very excited to switch from hosting the entertainment to being the entertainment. So let’s go nuts and listen to PB&J jam at the Live Lunch Music Series on Thursday, June 16th from 12:00pm-1:30pm

CASS: What venues have you performed at?

JEANINE: The Live Lunch Music Series will be PB&J’s second live performance ever! Our first show was at Byer’s Brewery in Downtown DeKalb in January of 2020. By the time we started to organize another show, the world had stopped, so we are very excited to be back performing!

C: What was the inspiration for the formation of PB&J?

J: The joy of playing music together! Our band unofficially formed back in 2018 and I say unofficially because we initially didn’t start out with the intention of forming a band. We just enjoyed jamming together. As we added more and more songs to our repertoire, we decided to give our group a name and start publicly performing.

C: When did your passion for live performance begin?

J: I know each of us would have a different story, but personally I developed my passion for live performance at about the age of 4 on, believe it or not, the stage of the Egyptian Theatre! I danced with Debbie’s Dance Dimensions from a very young age and there is no natural high like being in front of a crowd doing what you love. To be bringing this love full circle now as an Egyptian Theatre employee and performer is something 4-year-old Jeanine would have never imagined. And it is even sweeter to be sharing the stage with two of my best friends as well!

C: What genre(s) of music and atmosphere should an audience expect when they come to watch you perform?

J: We tend to play a lot of folk and bluegrass but will throw in some classic oldies tunes in there as well. We found our sound by playing songs we all really like and went from there. Some songs that we play started because one of us started playing a couple notes from a song out of the blue, then we’d all jump in and at the end look at each other and say that was pretty good, add it to the list!

C: If you could open for any artist/band, who would it be and why?

J: Oh boy… I would say Dave Rawlings Machine. But we would have to have a conversation with him and Gillian beforehand because we play a LOT of their songs.

C: What song do you enjoy performing the most and why?

J: Dive Bar! Whenever we are in a bit of a funk, that song just gets us energized! It is super twangy and Ben’s guitar solos are so good!

C: Why is music important?

J: Music, especially live music, has the power of connecting people. You can be in a full audience listening to a symphony that has no words, but as a collective you are all feeling the emotion these artists are conveying through their instruments. Yet music is so personal. I know this sounds cheesy, but music can tap into your soul. It can take you on a journey or bring you peace if your life is in turmoil or make you nostalgic for a time when a song was important to you. I think as we make our way out of COVID, music and performance will feed that part of us that was so deprived during the pandemic.

C: What advice would you give to beginners who are nervous?

J: Find an outgoing friend that will push you to perform! But honestly, when you are out there in front of whatever size audience, just have fun, don’t overthink it and be confident. Audiences pick up on your energy, so whatever you are putting out there, you will get back. And keep doing it!