Backstage at the Egyptian: Executive Director Alex Nerad on our first summer with air conditioning

Posted on August 2, 2021 by Egyptian Theatre

Hot news for the Egyptian: you might want to bring a sweater or jacket with you when you visit us. In 2019, the Egyptian Theatre pursued a massive construction project to revitalize the Theatre, including building expansions and the exciting new air conditioning system. This will mark the first time the historic Theatre has had air conditioning since opening in 1929! Guests can now experience entertainment year-round in the comfort of the cool air. Alex Nerad, Executive Director of the Egyptian Theatre shares his perspective on the process of adding the air conditioning system during the trying times of COVID. We look forward to chilling with you in our newly renovated space at our upcoming performances. 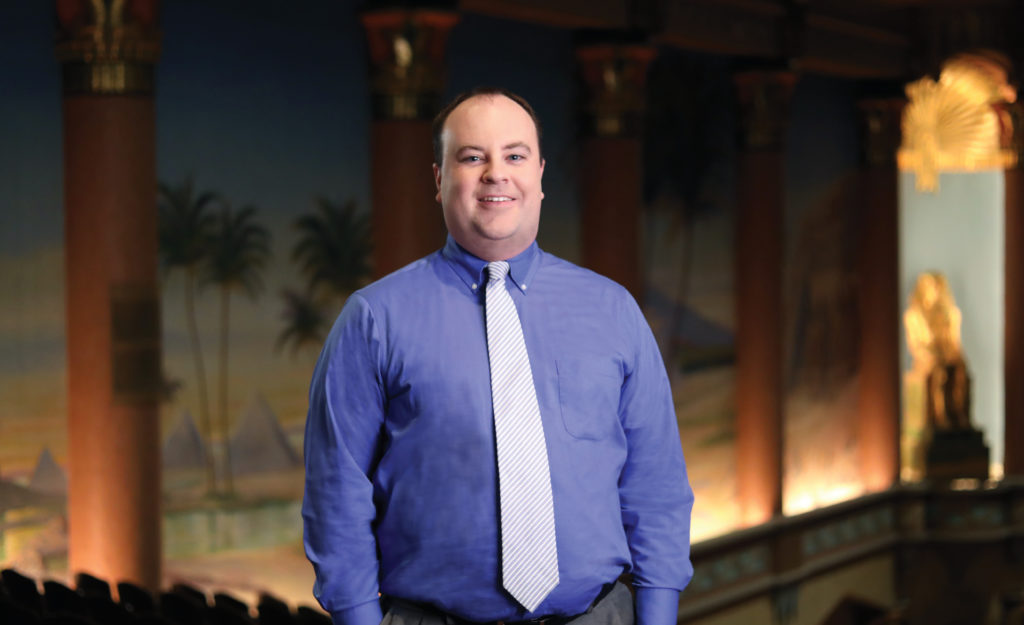 CASS: How does it feel to say that for the first time since the doors open 91 years ago, the historic Egyptian Theatre has air conditioning?

ALEX: It’s very “cool”.  Seriously though, it is incredible, so many times in the history of the Egyptian Theatre there were attempts to air condition the Egyptian and for a multitude of reasons it never happened.  To not only finally achieve that, but to set the Egyptian up for decades of further success, is extremely gratifying.

C: The Theatre’s first major concert post-COVID and post-renovation occurred on June 25th, 2021 with the band A Brother’s Revival. What were the overall responses to the new renovations by people who attended the performance?

A: Those that have been to the Egyptian Theatre before the expansion project are blown away with the improvements.  Those that have never been before are almost equally impressed by how the Theatre looks and all the amenities available to patrons.  The community, thus far, seems very impressed by all the details that were included to keep everything new looking historic.

C: How long did it take to install the air conditioning? Were there any unexpected problems that rose during the installation of the unit?

A: The entire expansion project, which included the addition of air conditioning, started May 1, 2019 and was substantially complete by October 1, 2020.  Every day featured new unexpected challenges.  We were opening up and connecting to a 90+ year old building that had very few drawings from construction and very few records of all the work done through the decades.  So, it became the “norm” to expect a surprise (a.k.a. headache) nearly every day.  We were fortunate to have a fantastic team in place to help us work through all those challenges.

C: How much of $6.5 million expansion project was dedicated to the installation of the air conditioning?

A: That is a hard question to answer definitively because there were so many aspects of the project that were intertwined with one another.  The air handler units just for the auditorium cost over $100,000.  There are additional units for the stage, lobby spaces, and addition.  Then you start adding in the upgrades to the building electric service, gas service, asbestos abatement, structural work to hold the roof top units, duct work, plaster repair, and more…you start to get a grasp of how complicated and massive this project was.

C: Did COVID pose any significant challenges to the renovation project? Were there any positive outcomes of completing the project during the pandemic?

A: Without a doubt, COVID introduced significant challenges while also presenting silver linings.  Prior to the COVID shut down of the Theatre, we were operating with programming every week while construction progressed.  There is no way to accurately describe how taxing this was for our staff and the contractors.  Every Friday, we would all pitch in to hide as much of the construction materials and tools as possible and clean up for shows on the weekend.  Then on Monday everything would be dragged back out again.  It was estimated that roughly 8 hours each week were spent on consolidating, cleaning, and reopening all the construction elements.  Once we were closed down due to COVID, construction could move forward without those additional steps each week.  While work progressed faster, there were also significant delays as items such as light fixtures, door hardware, equipment, and more were delayed due to factory shut downs and transportation delays.  Some items were delayed up to 6 months and some items were discontinued and new items had to be selected.  All this combined ended up extending the completion of the project and increasing the final cost.  COVID wasn’t something anyone could have anticipated or planned for.

A: Coming out of COVID closures, the air conditioning has been a literal life saver for the Theatre.  Summer of 2021 (our first summer open with air conditioning in 90+ years!) turned out much busier than expected thanks to the AC.  We typically host 3 local dance studios each June for their final shows of the school year.  They are accustomed to the blazing heat and humidity that often plagued the inside of the Egyptian Theatre in June.  We started receiving phone calls from other dance studios that couldn’t perform at their usual location because of COVID closures, so they reached out to us.  Prior to this project, we would have said “just so you know, we don’t have AC”…and they would all have passed.  Since we now have air conditioning, we were able to pick up 10 additional dance studios, 2 summer theatre camps, and present a summer family film series.  All of that is extremely helpful in getting the Egyptian Theatre back on its feet financially after the devastating impact COVID had.  So, it is fantastic to be able to say that the very first summer with air conditioning was a success!

C: What are some future projects the Egyptian Theatre would like to pursue to continue to enhance the experience for all that gather to experience its diverse collection of entertainment?