Backstage at the Egyptian: An interview with volunteer Kody Williams

The Egyptian Theatre has a fantastic set of hardworking volunteers dedicated to keeping everything running smoothly. Kody Williams has a long track record of volunteering with the Egyptian going above and beyond what’s expected. I have had the privilege to work with Kody at the Theatre so I was extremely interested to hear what stories he has collected over the years.

Chris: What do you do at the Egyptian?

Kody: Though this is not an official title, I would call myself a Senior Volunteer. I know all the ins and outs of the theatre. I assist with concessions, overall house management and with technical aspects of the theatre. I am also on the Haunted House Committee which is tasked with planning the biggest fundraiser of the year for the theatre. 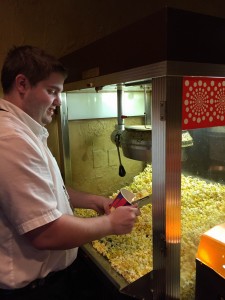 Chris:
Describe your first experience with the Egyptian Theatre.

Kody: I had not heard of the Egyptian Theatre before I started volunteering. A friend and I were looking for a haunted house to work at and we came across the Amenti Haunted House. After reading about the Haunted House we both knew that we wanted to be involved. The first night I was there I knew that I would end up sticking around for a while. The staff was very friendly. Once I learned about what the theatre does for the community I decided I would love to help.

Chris: What keeps bringing you back to the Egyptian?

Chris: What is your favorite memory at the Egyptian?

Kody: My favorite memory at the Egyptian was when I was Ron White’s stage hand. I was responsible for bringing out Ron’s famous whiskey on to the stage. This bottle of whiskey was very expensive. As I was bringing the bottle out to the stage during a blackout, someone in the audience knocked over a glass beer bottle. Everyone on the stage had thought that I had dropped the bottle of whiskey all over. Joke was on them!

Chris: Who would win in an epic battle: Batman, Superman, or Alex Nerad (Egyptian’s Executive Director)? 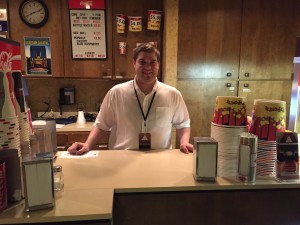 Kody: Now that might be the toughest question. Well I would truly have to say from Alex’s track record, he would win the battle by a land slide. If someone tells Alex something cannot be done, he will find a way to do it. Alex has given the theatre 110%. Without Alex by the theatre’s side I do not know where the Egyptian would be today. He spends his days and nights trying to figure out ways to tackle the ever growing list of battles the theatre faces.

Stop by and say hello to Kody while he is volunteering this Friday at the Rocky Horror Picture Show. If you are interesting in volunteering with the Egyptian Theatre email [email protected] to get started!